Abigail J. “Abby” Williams, 13, and Liberty Rose Lynn “Libby” German, 14, went for a hike on February 13, 2017 in Delphi, Indiana. They were reported missing later that day, when they failed to return. Police didn’t suspect foul play until the next day, when their bodies were discovered. Incredibly, a photo and a video/audio recording of a man who police believe murdered the two teenage girls were found on Libby German’s cell phone. While more than 26,000 tips have flooded into the police, the Delphi killer remains at large. Here is a timeline of events tied to the unsolved double homicide.

February 13, 2017 was unseasonably warm, and Libby German and Abby Williams wanted to take advantage of their day off school. It was not uncommon for the two friends to explore a nearby trail, taking pictures of the trees, flowers, and each other.

1:45 p.m. – Libby’s older sister, Kelsi, dropped the two teenagers off at an abandoned bridge in Delphi, Indiana so they could go hiking on the Monon High Bridge Trail. Kelsi told the girls that she would return to the same bridge later that afternoon to pick them up.

2:07 p.m. – The two eighth-graders walked toward the northeast end of the bridge. At 2:07 p.m., Libby posted a Snapchat photo of Abby walking on the abandoned railroad trestle, which was 63 feet high. 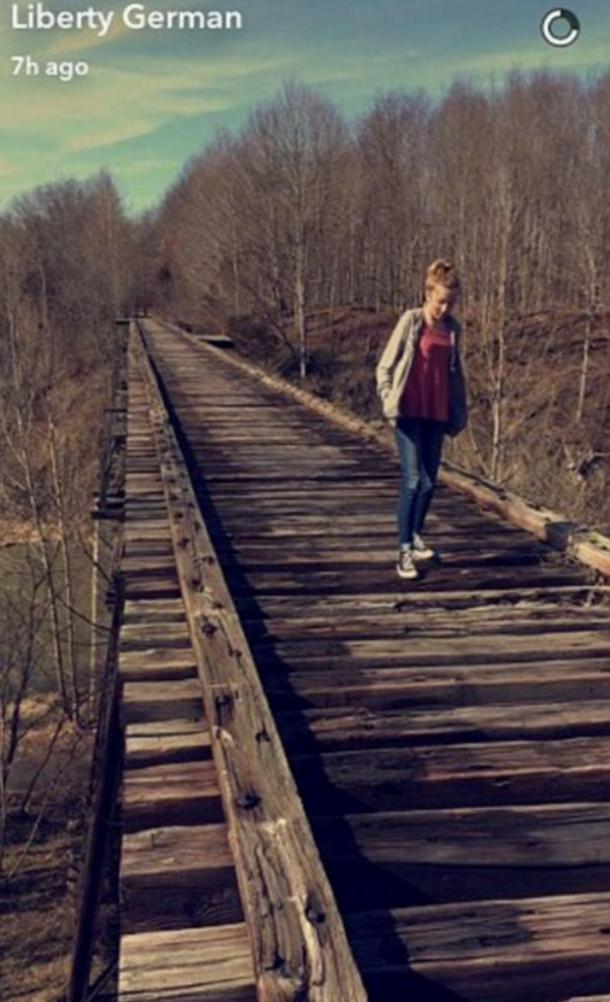 3:00 p.m. – Kelsi returned to the designated meeting place to pick up the girls. Abby and Libby did not show up, so family and friends began to search for them in the area.

5:30 p.m. –  The girls were reported missing to local police. A large search effort involving law enforcement and volunteers got underway.

2:30 a.m. – The search was called off due to darkness. Carroll County Sheriff Tobe Leazenby said he did not believe there was any reason to expect foul play or that the two teenagers were in danger. He said that the biggest challenge facing the girls was exposure to the elements.

12:00 p.m. – Around noon, a volunteer found the bodies of Libby and Abby on private land less than a mile from the bridge where they were dropped off.

2:00 p.m. – During a press conference, police confirmed that they discovered two bodies, but did not release the identities. They did, however, admit that “foul play” was suspected in the deaths.

4:00 p.m. – Delphi Community Schools Superintendent Gregory Briles said that while school and law enforcement officials had not made an official announcement, it was his understanding that the bodies were those of Libby and Abby. Briles said that grief counselors were at the school and would be there for the rest of the week. Briles also said that school security would be enhanced.

8:00 a.m. – Autopsies were conducted on the two bodies in Terre Haute. There was never any mention of how the girls died; no wounds or trauma had been reported. Police also did not say whether they were looking for a murder weapon.

10:00 a.m. – Sergeant Kim Riley of the Indiana State Police provided an update on the investigation. He said the authorities had conducted autopsies, but he did not yet confirm the identities or mention any suspects.

3:00 p.m. – The Carroll County Sheriff’s Department and Indiana State Police held a joint news conference, where they finally confirmed that the two bodies found the previous day were those of Libby and Abby. They did not release the cause or manner of death.

Police did not have any suspects in custody but did not believe there was any immediate danger to the community. Despite the reassurance, Sheriff Leazenby told people to “be more mindful and watch your surroundings a little closer.”

7:00 p.m. – Indiana State Police released a photo of a man walking on the trail around the time that Abby and Libby disappeared. The man was walking with his head lowered and his hands in his pockets. The image was grainy because it was cropped out of a larger picture taken by Libby on her cell phone on February 13. The rest of the image was never released to the public. 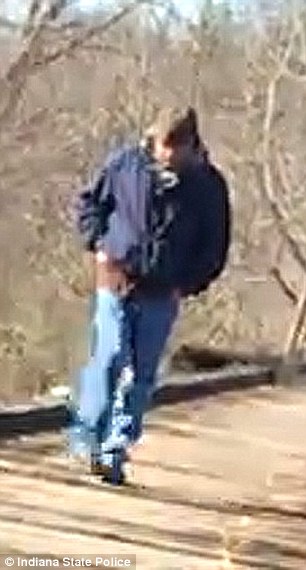 The Man Captured on Camera by Libby on the Day of the Girls’ Disappearance; Photo: Indiana State Police

At the time, the police said that the man in the photo was not considered a person of interest.

Indiana State police called Libby a “hero” for having the presence of mind to take pictures and make recordings.

6:00 p.m. – Police announced that they had set up a tip line for any information regarding the deaths of Libby and Abby.

6:45 p.m. – Funeral arrangements were made for the two teenage girls.

According to Abigail J. “Abby” Williams’ obituary, she enjoyed reading, camping, swimming, and riding ATVs. She also loved animals, especially her pet cat, Bongo. Abby was an artist who liked taking photos and drawing pictures. The obituary also said: “She and her good friend Libby were excited and looking forward to planning their next 4 years of school together.”

Liberty “Libby” German’s obituary said that she enjoyed swimming and playing soccer, softball, and volleyball. She also loved painting, doing crafts, and going on vacations. Libby was a band member and she had been preparing for the Academic Bowl with her High Ability class.

7:45 p.m. – Indiana State Police served a search warrant in connection with the deaths of the two Delphi teenagers. They searched a home on Bicycle Bridge Road. No arrests were made though.

12:30 p.m. – Police announced that the man in the photo released on February 15 was now officially a suspect in the murder of Libby and Abby.

10:00 a.m. – Investigators revealed that they found audio and video footage on Libby’s cellphone. There was a short voice clip of a man saying, “Down the hill.”

Police were not sure which hill he was referring to or whom he was speaking to. Was it to Libby and Abby, or to someone else who was with him?

Authorities also said that they had more footage from Libby’s phone, but that they would not be releasing it because the investigation was ongoing.

12:00 p.m. – The Indiana State Police, the Carroll County Sheriff’s Department, and the FBI served a search warrant on the home and property of Ron Logan, the man who owned the land where the bodies of Libby and Abby were found.

Logan was questioned in connection with the two murders, but was released.

Coincidentally, earlier in the day that the two girls went missing, Logan was arrested after driving on a suspended license and violating probation. Later, he pleaded guilty to charges related to t